Fall in the sector 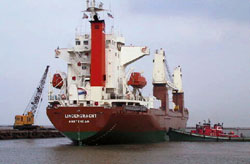 The latest Shipping Confidence Survey reveals a significant drop in overall confidence levels in the market.

Increased expectation that rates in the tanker, dry bulk and container ship sectors will fall in the next twelve months

The latest Shipping Confidence Survey by Moore Stephens has revealed a significant drop in overall confidence levels in the market, and an increased expectation that rates in the tanker, dry bulk and container ship sectors will fall in the next twelve months.

The firm's shipping partner, Richard Greiner says, "Our latest survey reflects weakening demand in the global economy and growing concern across shipping markets. The results show an industry less confident about its ability to maintain the momentum it has built in recent years. Market anecdote provided by respondents confirms that the global economic downturn and the credit crunch are starting to bite. Shipping has shown repeatedly that it is a robust and innovative sector. It is likely to need those qualities now more than ever before in order to ride out the storm."

On a scale of 1 to 10, the average confidence level reported by respondents was 5.6, compared to 6.8 in the previous survey in June 2008. Confidence levels fell across all sectors and regions and the greater divergence between respondents suggests greater uncertainty across market participants. Ship managers and owners were the most confident at 6.0 and 5.8 respectively, although these were markedly down on the corresponding figures in June.

A number of respondents acknowledged that the shipping industry is very vulnerable to the current global economic downturn, that any recovery will depend on a return to confidence in the financial markets, and that trade will inevitably suffer as a result of worldwide recession. A number of respondents felt freight markets would never again recover to reach the levels achieved over the last three years, while others noted that difficult market conditions would likely force out under-capitalised and over-exposed operators, to the ultimate benefit of the market as a whole. There was some evidence of a reluctance to conduct business with first-time customers, with one operator explaining, "Right now we prefer not to work than to work and not get paid, so we will rely on regular customers or at least on new ones whom we know we can trust".

Other respondents, however, saw reasons for optimism in sustained growth in China and India, where energy demands will continue to drive tanker business. Some hoped that recent falls in commodity prices would support demand in the dry bulk and container ship sectors, albeit at reduced levels.

Demand trends, the cost and availability of finance and competition are now clearly respondents' key concerns. Although Moore Stephens' unique operating costs benchmarking report, OpCost, recently confirmed that ship operating costs had surged by over 11% last year, this survey reveals that just 10% of respondents expected such costs to significantly affect their performance over the next year.

As with confidence levels, there was a wider range of sentiment on the likelihood of respondents making a major investment during the coming year. Ship managers replaced ship owners as the most likely, but their expectation level of 5.6 out of 10 (against an average overall score of 5.2) was still significantly down on the previous survey. Owners, meanwhile, dropped a whole point, from 6.5 to 5.5 in this category.

In the freight markets, there was evidence of a significant shift in expectations towards lower rates, most strongly in the tanker and container ship sectors. In the tanker market, for example, 52% of respondents expected rates to fall whereas in June, 45% expected them to rise. The number of owners expecting rates to fall was also up, from 37% to 45%. Regionally, North America and Asia, with 29% and 23% respectively, led the way in expecting an increase in tanker rates, while in Europe the figure was 18%.

In the dry bulk market, there was an increase, from 35% to 43%, in the number of respondents predicting lower rates, but a rise also, from 32% to 35%, in the numbers of those anticipating increases. While in June responses to this question were more evenly spread, a smaller proportion of respondents in November expected rates to stay the same. More managers and brokers expected higher rates than expected lower while more owners expected lower rates than expected higher.

Finally, 50% of respondents to the survey expected container ship rates to be lower in twelve months' time, compared with 20% who expected them to be higher. This represents a significant change compared to Moore Stephen's June 2008 survey, when respondents' views were somewhat inconclusive.

This news is a total 1054 time has been read