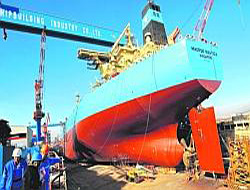 A 300,000-tonne oil tanker is ready for delivery to Maersk at a Dalian shipyard, proof of China's success as a shipbuilding nation and its progress towards the goal of leading the industry by 2015.

In a drydock at a shipyard in north-east China's Dalian city, a 300,000-tonne oil tanker is ready for delivery to Maersk, its hull painted in the Danish shipping company's trademark blue.

Nearby, an offshore drilling platform has been constructed according to precise specifications from US company Noble.

Both are examples of China's growing success as a shipbuilding nation and its progress towards the goal of becoming number one in the industry by 2015.

'Last year, the order books at Chinese shipyards surpassed those of Japan, to be second only to South Korea,' said Li Cheng, assistant general manager of Dalian Shipbuilding Industry Co.

In terms of new orders, China was actually number one last year, totalling 98.5 million dwt, or 42 per cent of the global total, according to the Beijing government.

'Chinese shipyards have had their business boosted by the very fast growth of the local economy, which has fuelled demand for container ships and other vessels,' said Mr Li. 'If it continues like this, we'll overtake South Korea.' Chances are it will indeed continue like this. Dalian shipyard, located in the Gulf of Bohai, has its order books filled right until 2011.

The expansion of the Chinese economy - leading to strong growth in both exports and imports - is not the only factor behind this success.

Equally important is the global boom in shipping. Eighty per cent of the output of China's shipyards is exported. The result is that China's share of the global market has expanded from 18 per cent in 2006 to 23 per cent last year, while South Korea and Japan account for roughly 35 per cent each, according to research institute Clarkson.

'It's not impossible that it will eventually take up the leadership position (ahead of South Korea),' said Caroline Huot, general manager of Total Lubmarine for the Asia Pacific.

'It's got the will, no doubt. There's a real can-do attitude in China.' She added the government offers strong support for the shipbuilding industry, investing large amounts of money in new shipyards.

But in recent years, it has also seen a large number of new entrants, in the form of smaller shipyards run by local governments or private groups, or set up as joint ventures.

There are now 3,000 of these smaller shipyards, up from just 350 a decade ago. At the same time, Chinese shipyards have succeeded in building up a good reputation.

'The Chinese companies are very concerned about safety and the environment. They are large and extremely professional enterprises, and they're just as good as their counterparts in the United States or Norway,' said Ms Huot.

The Dalian shipyard has clients across the globe, from Gear Bulk, 60 per cent Norwegian-owned, to Sweden's Stena AB and customers in Greece and Iran. To keep up its competitive advantage, the Dalian shipyard now spends heavily on research and development and the continued improvement of the infrastructure. 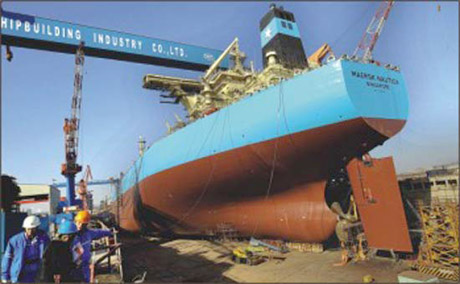 This news is a total 1524 time has been read