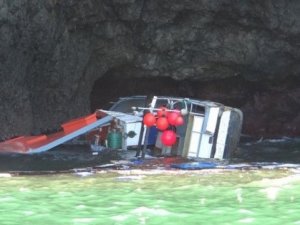 Crew fatigue led to the grounding and loss of commercial fishing vessel Jan and its owner, Wild Fish (NZ) Limited has been fined NZ$27,200 ($18,300) following prosecution by Maritime NZ.

The sole helmsman at the time of the grounding, a 17-year-old deckhand, fell asleep soon after going on watch in the early hours of January 11, 2016. He had worked a full day, slept for between only one hour and three-and-a-quarter hours, and was then woken to take his turn on watch. He had never before been on watch by himself at night.

After the helmsman fell asleep, Jan ran on autopilot and grounded on rocks near Howe Point in the Bay of Islands. The grounding woke the skipper and the other crew. The skipper ordered the crew to abandon ship due to the hull being breached and water ingress. Jan then capsized and was a total loss.

Maritime NZ told the court that Wild Fish Limited had acted recklessly. There was no effective system for monitoring the sleep of crew members to ensure that overly fatigued crew did not go on watch. Exacerbating the situation, a crew member with limited watch-keeping experience was permitted to go on watch alone. His fatigue level heightened the risk of him falling asleep on watch, and there was no mechanism or work procedure to wake him if he did.

Fatigue is one of the biggest factors causing injuries on fishing vessels. Maritime NZ cites some statistics about commercial fishing crew:

In June last year Maritime NZ and the fishing industry began working together on a three-year safety campaign “Safe crews fish more.” Its aim is to reduce injuries. Managing fatigue is one of the key areas it is addressing.

This news is a total 670 time has been read
Tags: Fatigue Led to Fishing Boat Capsize