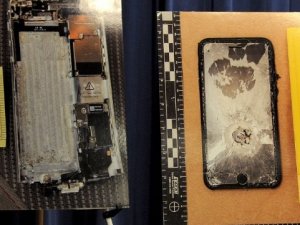 The Saudi Air Force officer who opened fire on American personnel at Naval Air Station Pensacola last year had been in contact with members of Al Qaeda before the attack, according to the Justice Department.

In a briefing Tuesday, Attorney General William Barr and FBI Director Christopher Wray said that the FBI had succeeded in unlocking phones belonging to the shooter, Second Lt. Mohammed Saeed Alshamrani (Royal Saudi Air Force). The phones contained previously-unknown evidence that tied Alshamrani to the terrorist group Al Qaeda in the Arabian Peninsula, including evidence showing that he was in contact with terrorists before coming to the United States.

On December 6, Alshamrani opened fire on personnel in a classroom at Naval Air Station Pensacola, where he was enrolled in flight training as a military exchange student. Three U.S. Navy sailors were killed in the exchange, including Ensign Joshua Kaleb Watson, 23; Airman Mohammed Sameh Haitham, 19; and Airman Apprentice Cameron Scott Walters, 21. Local law enforcement personnel neutralized the shooter about one hour after the incident began, bringing the total death toll to four. Seven people were injured, including two civilian law enforcement responders, according to the Escambia County Sheriff's Office.

According to the FBI, Alshamrani’s preparations for the terrorist act began years ago. He had been radicalized by 2015 and joined the Royal Saudi Air Force in order to carry out a “special operation” for AQAP.

In the months before the attack, while in the United States, Alshamrani spoke with overseas AQAP associates regularly about plans and tactics using encrypted messaging apps to evade surveillance. The evidence from his phones showed that he was communicating with AQAP up until the night before the attack.

The Justice Department said that evidence from the phones has already been used against terrorists. In particular, a counterterrorism operation targeting AQAP operative Abdullah al-Maliki, one of Alshamrani’s overseas associates, was recently conducted in Yemen.

The FBI's effort to break into Alshamrani's phones highlighted the ongoing tensions between the Justice Department and Apple. The company provides its customers with high-grade encryption on iPhone devices, and it has refused to build in a "back door" for law enforcement, drawing accusations that it is creating difficulties for investigators.

"Thanks to the great work of the FBI – and no thanks to Apple – we were able to unlock Alshamrani’s phones,” said  Barr. “If not for our FBI’s ingenuity, some luck, and hours upon hours of time and resources, this information would have remained undiscovered. The bottom line: our national security cannot remain in the hands of big corporations who put dollars over lawful access and public safety. The time has come for a legislative solution.”

This news is a total 225 time has been read
Tags: FBI: NAS Pensacola Shooter Had Ties to Al Qaeda