FDPSO will leave for Congo 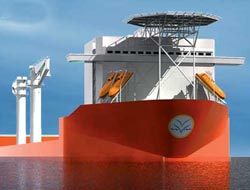 The world's first (FDPSO), which is owned by Prosafe Production, has left Keppel Shipyard in Singapore.

The world's first (FDPSO), which is owned by Prosafe Production, has left Keppel Shipyard in Singapore.

The world's first (FDPSO), which is owned by Prosafe Production, has left Keppel Shipyard in Singapore on January 24, 2009. After a short stay at anchorage, it will head for the Republic of Congo where it will be deployed at Murphy West Africa Ltd's (a subsidiary of Murphy Oil Corporation) deepwater Azurite development in the Mer Profonde Sud Block. Named the Azurite, this first of its kind FPSO with drilling capabilities incorporates a design that is cost efficient and effective for drilling and producing deepwater fields. The vessel is equipped with a modular drilling package that can be removed and reused elsewhere when the production wells have been drilled. The Azurite has a storage capacity of 1.4 million barrels of oil and a process capacity of 60,000 bfpd/40,000 bopd and will be spread-moored at a water depth of 1,400 meters.

This news is a total 3086 time has been read