Fed chair cites $50 a barrel oil for inflation to rise 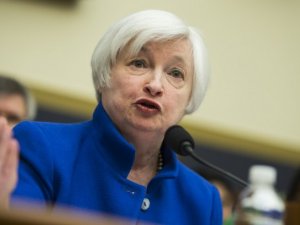 If oil prices were to increase to $50, that would slightly move up our expected path for core inflation,' Yellen says

Federal Reserve Chair Janet Yellen pointed to oil prices reaching $50 a barrel as a factor for inflation in the country to pick up.

Speaking at a press conference after the Federal Open Market Committee's (FOMC) two-day meeting, Yellen said, "if oil prices were to increase to 50 ... that would probably slightly move up our expected path for core inflation, maybe speed, how rapidly we would move back to 2 percent."

Yet, the Fed Chair was not very hopeful that oil prices, which hover around $40 per barrel at the moment, would reach their previously high levels that were above $100 per barrel before the third quarter of 2014.

But she stressed that prices should be stabilized at a higher level than current levels and noted that the FOMC viewed prices as "a factor that should have a transitory influence".

"What I mean is that if oil prices move up during the time that it's moving up it raises inflation ... but they don't need to move down again to their previous levels for that influence to disappear. They are obviously volatile ... they only need to stabilize at a higher level," she said.

Yellen also noted that business investment in the U.S. has been weak, partly due to low prices causing further reductions in oil drilling, and there has been substantial layoffs in the energy sector.

However, she added that low oil prices continue to boost household purchasing power.

"Households have benefited pretty significantly from lower oil prices, and measures of consumer sentiment do reflect that," she concluded.