Feeder Elbsailor ran aground and blocked traffic at Kiel Canal 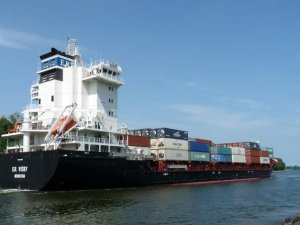 The feeder Elbsailor ran aground into the embankment near municipality Schacht-Audorf in the Kiel Canal.

The vessel was transiting in Eastbound direction, en route from Hamburg to St Petersburg, but after mechanical failure left the fairway and stuck into the sand bank. The accident was reported to the local authorities and at the scene were dispatched tugs Stein and Holtenau, which managed to pull the ship off the shallow. The container ship Elbsailor was towed to Klein-Konigsforde, where was secured at the berth for special survey and safety inspection. The local authorities initiated investigation for the root cause of the accident.

The traffic at the narrow fairway was blocked for several hours during grounding and salvage operations. The ship stuck shortly after midnight on January 31, while tugs were called from Kiel at 3 am, but only at 6 am the ship was refloated and the traffic was released.

Fortunately during the accident there were no injured people and no water pollution. The authorities will make an inspection of the ship, but there were no signs for underwater damages or breaches during the grounding.

This news is a total 2457 time has been read
Tags: Feeder Elbsailor ran aground and blocked traffic at Kiel Canal