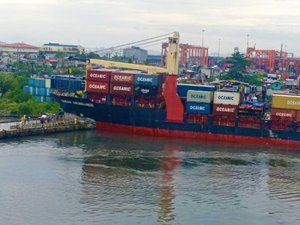 A feeder boxship, Ocean Abundance owned by Oceanic Container Lines Incorporated, rammed and damaged approximately five to ten metres of Pier 2 of the North Harbor at the Port of Manila.

The accident involving the 639TEU vessel occurred at around 03:10am (local time) on 10 August, according to the Philippine Coast Guard (PCG), but no-one was reported injured in the incident.

PCG's initial report said that there was no trace of an oil spill in the area, but both the vessel's bow and pier have suffered serious damage.

According to the crew, the incident was caused by an engine problem, when the 2003-built container ship attempted to reverse.

Personnel of the Coast Guard Sub-station – North Harbor continue to monitor the incident for further details.

This news is a total 1278 time has been read
Tags: Ocean Abundance, Oceanic Container Lines Incorporated