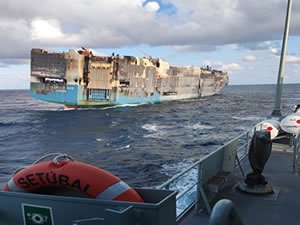 Reporting has indicated Felicity Ace was carrying around 4,000 vehicles, including some luxury brands like Porsches, Bentleys, and Lamborghinis, along with VW and Audis.

Salvage vessels will remain in the area to monitor the situation.

The sinking of the Felicity Ace comes nearly two weeks after a fire broke out in the ship’s cargo area. Reporting has indicated Felicity Ace was carrying around 4,000 vehicles, including some luxury brands like Porsches, Bentleys, and Lamborghinis, along with VW and Audis.

The value of the cargo has been estimated to be over $400 million. The fire on the Panama-flagged ship started Wednesday, February 16, approximately 90 nautical miles southwest of the Azores as the ship was underway from Embden, Germany, where Volkswagen AG has a manufacturing plant, to the U.S. East Coast. All 22 crew members abandoned ship and brought to safety.

A salvage team was reported to have boarded the drifting ship by helicopter last week. A tow line was connected and the salvage tug ‘Bear’ began towing it to the Azores under escort by two additional tugs, ALP Guard and Dian Kingdom, together with a large anchor handling tug with additional firefighting capability, named V.B. Hispanic. A February 25th update said the stability of Felicity Ace remained stable and smoke was no longer visible. But today’s update said the ship had developed starboard list.

Before today, the last photos released of the vessel, published way back on February 18th, showed burn scars from bow to stern, indicating the fire had likely engulfed the entire garage area.

The lead photo up top, released today, confirms that the fire did even more damage.

Some of the cars on board were reportedly elecrtic vehicles with lithium-ion batteries that complicated firefighting efforts. Unfortunately with the ship now at the bottom of the ocean, we may never know what caused the initial fire or contributed to its spread.

“Further information will be provided as it becomes available,” MOL said in its update. Built in 2005, the Felicity Ace is operated by Japanese shipping company MOL and owned by one of its subsidiaries, Snowscape Car Carriers S.A. SMIT Salvage, part of Dutch marine company Boskalis, was the appointed salvor.