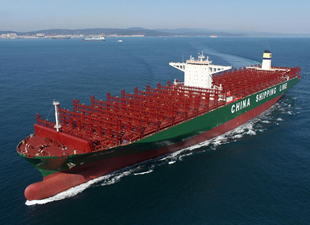 The world’s largest container vessel, the CSCL Globe, is due to arrive in the port of Felixtowe, the UK for the first time.

The behemoth vessel is scheduled to dock at Felixtowe at 1pm loaded with 19, 000 standard containers.

The Port of Rotterdam expects the CSCL Globe to arrive in the port on January 10. This call is meant to unload cargo and enables the vessel to sail up the river Elbe for its next stop.

On January 19, the vessel will be back again at Rotterdam Maasvlakte (Euromax Terminal) to be loaded with export cargo for Asia.

CSCL Globe, the first in a series of five same-sized ships ordered by China Shipping Container Lines (CSCL), embarked on her maiden voyage from Tianjin Port, China on December 1.

The containership made her last port call in Kelang in Malaysia.

On the way back there are calls in Port Klang in Malaysia, Singapore and five large Chinese ports before the Globe returns to Rotterdam again.

This news is a total 2568 time has been read
Tags: Containership, Felixtowe, News by topic, port, Readies, SHIPPING, The Netherlands, UK, World’s Biggest