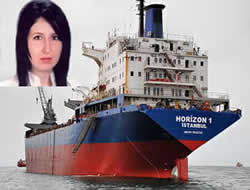 The family of a female captain aboard a Turkish ship that was seized by Somali pirates on Wednesday with 23 crewmembers on board has expressed concern over the fate of their daughter.

The family of a female captain aboard a Turkish ship that was seized by Somali pirates on Wednesday with 23 crewmembers on board has expressed concern over the fate of their daughter.

Aysun Akbay, 24, has been working for the company that owns the Horizon I for two months and had been assigned as the fourth officer on the hijacked ship, her father, Özcan Akbay, told the Anatolia news agency over the weekend, noting that this was the first time that his daughter had set sail for distant waters. ?We want to see our daughter return home safe and sound. We expect help on this issue from all authorities,? Özcan Akbay was quoted as saying by Anatolia.

Armed pirates surrounded the Horizon I in speedboats before boarding the ship, which was carrying sulfide from Saudi Arabia to Jordan on Wednesday morning. Turkish naval frigates TCG Gediz and the TCG Gaziantep, which have been in the region as part of a UN-led force to prevent pirates from hijacking foreign ships off the Somali coast, are closely following the Turkish ship Horizon I.

As of Friday, Anatolia, citing anonymous sources, said that the ship, which dropped anchor on Thursday morning at the port of Huzdivo in Somalia, was being taken to the port of Eyl in Somalia. Transportation Minister Binali Y?ld?r?m last week stated that in earlier hijacking cases, ships were taken to the port of Eyl and the pirates had asked for ransoms by getting in touch with the lawyers of the related shipping companies, adding that he expected the Horizon I to eventually be taken to that port as well.

This news is a total 7126 time has been read