Fennica is on his way to Alaska 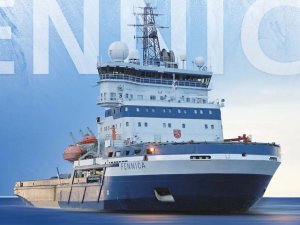 Shell's Fennica icebreaker has returned to Alaska, after striking an uncharted object and returning to Oregon for repairs marked by high-profile protests.

It docked at Dutch Harbor after enduring repairs and protests in Portland, Oregon.

Shell spokeswoman Megan Baldino said that the Fennica, which accompanied Shell’s fleet from Dutch Harbor before suffering hull damage from hitting the underwater obstruction, is back in Alaska waters.

Shell began drilling the top of a well in the Chukchi Sea last week, but it does not have federal permission from the U.S. Interior Department to drill into oil-bearing rocks unless the Fennica is on site.

Shell’s bright yellow well-capping stack sits on the stern of the Fennica.

It’s to be used in case a well blows out and other splll-prevention methods fail.

“Once the Fennica is in theater [in the vicinity of the Chukchi Sea drill sites], then we’ll engage in discussions with the regulator about that permit,” Megan said.

The ship had been met by protesters when it arrived in Portland, Ore.

Greenpeace members dangling off the St. Johns Bridge had delayed the Fennica’s planned July 29 departure by a day, despite facing $2,500-an-hour federal fines and the arrest of at least two protesters Thursday.

Word of the Fennica’s return comes as the second drilling platform engaged for the season -- TransOcean’s Polar Pioneer -- continues to drill the top portion of the Burger J well, in what Shell has said will likely be a $1 billion project for the company.

This news is a total 24291 time has been read
Tags: fennica, alaska, shell, greenpeace, turkish maritime