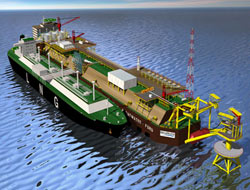 The bi-partisan FERC yesterday unanimously approved construction and operation of the Broadwater LNG Project to construct and operate the first floating terminal for the storage and delivery of LNG in the United States.

The bi-partisan Federal Energy Regulatory Commission (FERC) yesterday unanimously approved construction and operation of the Broadwater LNG Project to construct and operate the first floating terminal for the storage and delivery of liquefied natural gas (LNG) in the United States.

After three years of intensive review, the Commission found that the project is consistent with the public interest. In a statement, FERC Chairman Joseph T. Kelliher stated that "Based on all available scientific facts, we approve the Broadwater project today, subject to rigorous conditions, because it can meet the projected energy needs for New York City, Long Island and Connecticut, and can provide the service safely, securely and with limited adverse impact on the environment."

"This decision is an important step forward in bringing new clean, reliable, affordable natural gas supply to a region where prices are volatile and climbing, air quality is a concern and is located at the end of the pipeline delivery system. Without new energy supply, energy consumers will continue to face volatile and increasing natural gas prices in New York and Connecticut," said John Hritcko, Senior Vice President, Broadwater LLC.

The Environmental Impact Statement (EIS) was developed with the assistance of the following cooperating agencies: the Department of Homeland Security, U.S. Coast Guard, the U.S. Army Corps of Engineers, the U.S. Environmental Protection Agency, the National Oceanographic and Atmospheric Administration, the National Marine Fisheries Service and the New York State Department of State.

Broadwater is a joint venture between TransCanada and Shell US Gas and Power.

The Commission's approval of the project is subject to the operator adopting more than 80 mitigation measures to enhance safety and security and to ensure it has limited environmental impacts.

"We have reviewed the record in the Broadwater LNG proceeding and have considered carefully the concerns of the many citizens who have commented on the project," FERC Chairman Joseph T. Kelliher said. "Based on all available scientific facts, we approve the Broadwater project today, subject to rigorous conditions, because it can meet the projected energy needs for New York City, Long Island and Connecticut, and can provide the service safely, securely and with limited adverse impact on the environment."

The Broadwater project would deliver up to 1.25 billion cubic feet (Bcf) of natural gas per day to fuel electric generating plants and heat homes. It would consist of a floating storage and regasification unit (FSRU) that would measure about 1,215 feet long and 200 feet wide, rising approximately 80 feet above the water line of Long Island Sound in New York State Waters. The project would be located nine miles off the coast of Riverhead, in Suffolk County, New York and 10.2 miles from the nearest onshore point in Connecticut. The U.S. Coast Guard has indicated that a safety and security zone of 1,210 yards (seven-tenths of a mile) would be placed around the FSRU to address security issues and public safety concerns.

A yoke mooring system, which will be incorporated in the bow section of Broadwater's FSRU, will moor the FSRU to a fixed tower and allow the FSRU to pivot, or "weathervane," around the tower and to withstand events exceeding 100-year storm conditions.

The project would include eight LNG storage tanks capable of storing the equivalent of 8 Bcf of regasified LNG, a regasification plant and a 21.7 mile long pipeline extending from the LNG terminal to a subsea interconnection with the Iroquois Gas Transmission System which will bring the gas onshore. 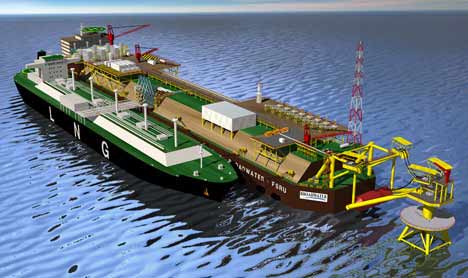 This news is a total 1408 time has been read