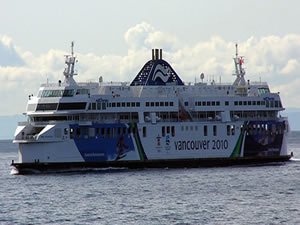 A man sustained serious injuries in an accident during unloading from the car ferry Coastal Rennaissance at the port of Tsawwassen, British Columbia on Tuesday.

At about 1230 hours, Delta emergency services received a call about a car accident at the Tsawwassen ferry terminal.

According to BC Ferries, the Coastal Rennaissance was discharging cars as usual, and most of the vehicles had exited the vessel.

As the last were departing, a crew cab pickup that had been stowed on the upper deck drove off onto the loading ramp, then accelerated sharply and crashed through a concrete barrier.

The truck fell onto the pavement below, sustaining significant damage.

“The last vehicle to be unloaded off the upper car deck drove off the ship, accelerated rapidly and smashed through a concrete wall,” said BC Ferries spokesperson Deborah Marshall.

“The vehicle fell approximately 30 feet to the lower holding compound of the terminal, landing on its roof.” No passengers were in the truck and only the driver was injured, according to local police.

He was conscious and able to speak with first responders, according to Marshall, but local emergency services said that he was transported to the hospital in critical condition.

The Coastal Rennaissance was briefly delayed, but her operations (and the terminal's) have returned to normal status.

This news is a total 2749 time has been read
Tags: Ferry Loading Ramp Accident Leaves Driver With Serious Injuries