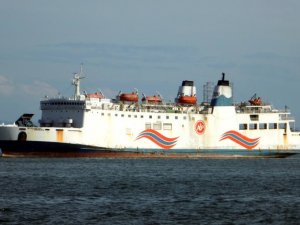 The ferry Mutiara Sentosa I burned in Masalembu waters of East Java, causing death of 5 people, while another 24 are missing.

The ship was en route from Surabaya to Balikpapan with at least 178 people on board, when short circuit on one of the trucks on board caused an explosion. The crew raised alarm and ordered evacuation of all the people into the lifeboats. The accident was reported to local authorities. The evacuation process involved a number of vessels belonging to Basarnas from Bali, Semarang and Balikpapan as well as two helicopters. The rescuers succeeded to account 150 people, but at least 24 went missing and 5 were found dead.

However, according to officers of the SAR picket in Surabaya, the explosion happened in LPG gas cylinder carried by one of the trucks on board. The ship contains more than 70 trucks and more than 170 passengers.

“While in the manifest there were only 92 people, later was estimated that on board are 178 people – 44 crew and 134 passengers”, said the SAR Surabaya officer, Agung Hutomo.

The local authorities also released that before departure from Surabaya, the ferry Mutiara Sentosa I passed series of technical and administrative tests by local authorities. The quote is conducted to ensure all services meet the safety and security aspects of the voyage. The vessel passed the quotation test and is declared eligible to sail to the destination.

This news is a total 525 time has been read
Tags: Ferry Mutiara Sentosa I burned in Masalembu waters of East Java causing 5 deaths and 24 missing