Ferry runs aground off Blackpool 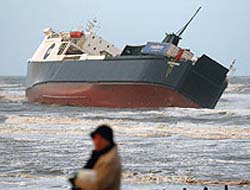 A roll-on roll-off ferry which ran into trouble in high winds in the Irish Sea has run aground off Blackpool.

A roll-on roll-off ferry which ran into trouble in high winds in the Irish Sea has run aground off Blackpool.

A total of 19 crew members and four passengers were flown to safety from the Riverdance, after it was hit by a freak wave in bad weather.

Nine of the crew members were still on board when it ran aground on the north shore of Blackpool beach on its journey from Northern Ireland to Heysham.

Owner Seatruck Ferries said it was trying to salvage the ferry.

A spokesman for Seatruck Ferries said: "The conditions are such that the master requested helicopter transfer of all personnel.

"All nine (crew members) are now safely off."

He added: "The issue was that as we approached high water the vessel started to rotate broadside on the beach.

"The high swell caused a list and, under those circumstances, the master decided safety came first."

He said the boat was listing 30 degrees and there was a risk that a helicopter rescue would be impossible if it was delayed any longer.

"We have now organised salvage assistance for the vessel," he added.

The Riverdance got into difficulties on Thursday evening, 10 nautical miles off the coast of Fleetwood, Lancashire, over a bank known as Shell Flat.

It had been sailing from Warrenpoint in Northern Ireland.

The vessel issued a Mayday at about 1930 GMT and three helicopters from the RAF, Royal Navy and Coastguard, were sent to the scene to help winch those on board to safety.

People were lifted two at a time into the helicopters, with nine crew staying on board to try and prevent the vessel from sinking.

Rich Taylor, one of the RAF winch men involved, said: "It took some time to get the first rope down to the boat.

"Unfortunately, we then lost contact with that rope just through the boat moving away from us in the big swirl.

"So we had another bash at it and managed to get another rope down."

Seatruck Ferries Limited said the stricken vessel had been carrying trucks and trailers from Warrenpoint in Northern Ireland to the port of Heysham in Lancashire, when it was struck by the freak wave.

The wave caused the ship's cargo to shift resulting in the vessel developing a significant list.

Speaking during the rescue operation, John Matthews from Fleetwood RNLI described the sea conditions as "horrendous" with 7m waves and winds of up to 60mph (96km/h).

Kevin Hobbs, the chief executive of Seatruck Ferries Limited, defended the decision to run the service in bad weather.

"When the vessel sailed there was no cause for concern," he said.

"There are many ships at sea at the moment in these conditions and we've just been extremely unlucky."

Those flown to safety have been taken to Blackpool Airport to recover and be assessed for injuries.

Supt Richard Spedding, of Lancashire Police, said a couple of them had "very, very minor injuries" but they were "glad to be safe on dry land". 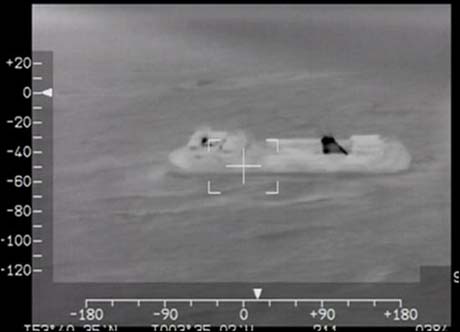 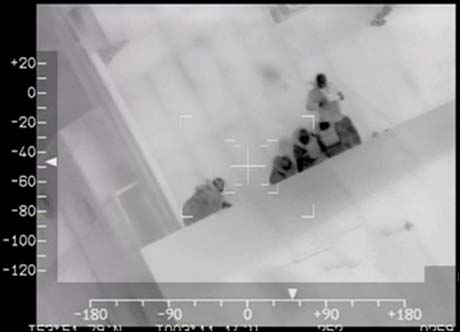 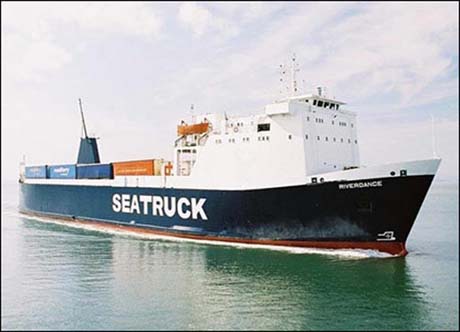 This news is a total 1349 time has been read