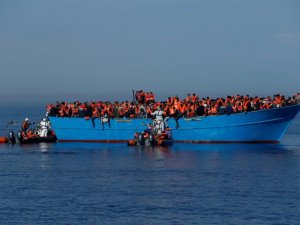 A “ferry service” that encourages people smugglers or an essential humanitarian rescue service that saves thousands of African migrants making a dangerous sea crossing to Europe?

This debate among EU officials about the role of aid groups in the Mediterranean highlights their dilemma between the moral and legal obligation of helping those in need, and growing pressure from voters to keep them away.

Escaping wars and poverty, more than 360,000 refugees and migrants made it to European shores across the Mediterranean last year. Most of them arrived on EU rescue vessels.

Thousands more have drowned at sea, loaded by human traffickers onto boats unsuitable for the long journey between Libya and Italy.

The EU’s approach has increasingly shifted towards keeping people away, drawing widespread condemnation from rights groups but going some way to soothing nervous voters. One official in Brussels said there was no choice but to take the NGOs to task.

“We can’t avoid doing it. As much as it is harmful to the migrants. With the NGOs operating so close to the Libyan shores, it is tantamount to providing a ferry service,” the official said.

“It’s almost as if the smugglers were putting people directly on NGO boats.”

Appalled by the loss of life, aid groups such as Medecins Sans Frontieres (MSF), MOAS, Sea Watch, SOS Mediterranee, Sea Eye, Jugend Rettet, Save the Children and others have stepped up their search and rescue operations and moved closer to the Libyan coast.

That is further south than EU, NATO and merchant vessels are prepared to go because of legal, security and political concerns.

MSF says the move is essential for saving more lives.

“If you want to have an impact, you have to be able to rescue them as close to the shore as possible,” said Aurelie Ponthieu of MSF in Brussels.

The subject is being debated around the EU. Belgium’s migration minister, Theo Francken said in March that MSF was encouraging people smugglers, earning him a swift rebuke from his prime minister Charles Michel who told him to “respect humanitarian work”.

BOATS WITH NO ENGINE

MSF and other NGOs stepped up their rescue efforts in the last migratory season, which starts in the spring when the seas are calmer, and moved them inshore.

Frontex says this has allowed people smugglers to maximise their profits by using flimsier boats, providing tiny amounts of fuel or food, and sometimes removing the engines, resulting in more casualties.

The agency called for the role of the NGOs to be examined.

Authorities in the Italian port of Catania have opened a fact-finding probe into the role of NGOs. When chief prosecutor, Carmelo Zuccaro, first launched the probe in February, he said he was looking for any signs of collusion between NGOs and people smugglers.

The Italian parliament is also looking into the role of the NGOs in the search and rescue operations near the Libyan coast.

“We have to strike the right balance between saving lives and making sure our actions don’t fuel a criminal business…by encouraging criminals to adapt their modus operandi to the fact that there will be vessels approaching Libya,” Frontex head Fabrice Leggeri told Reuters.

A MATTER OF HOURS

Leggeri said nearly half of all search and rescue operations are now carried out by NGOs, making it harder for governments to control the process.

MSF and other aid groups involved in search and rescue operations (SARs) say their only goal is to save lives.

“We are doing proactive SARs, not sitting back and waiting for when it’s too late. None of these boats will make it. It’s a matter of hours before these people die or drown,” said Ponthieu.

But many EU officials say the NGOs are encouraging the flow, even if unwittingly.

“We have always seen these rescue operations as a pull factor. If migrants know they will be rescued, they will come,” said one EU diplomat in Brussels.

The NGOs say they are being made the scapegoat for the EU’s own failure to manage migration as politicians tap into higher anti-immigration sentiment among voters.

Deputy head of the EU’s executive arm, Frans Timmermans has come out strongly on the side of the NGOs.

“Saving lives at sea and looking after vulnerable people… is not the same as promoting irregular migration,” he said last month.

“There is no evidence whatsoever of NGOs working with criminal smuggling networks to help migrants enter into the EU.”

This news is a total 1197 time has been read
Tags: Ferry Service or Humanitarian Rescue Boat: EU’s Mediterranean Dilemma