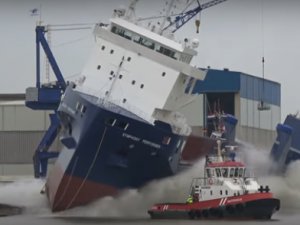 Dutch shipbuilder Ferus Smit launched Symphony Provider, the second in a series of EXOBOX DP2 vessels built for compatriot company Symphony Shipping, at its shipyard in Leer, Germany, on March 9.

The 10,500 dwt Symphony Provider, which has a length of 125 meters and a width of 18 meters, is scheduled for delivery in April 2017, according to VesselsValue’s data.

The long range supply vessel is equipped with a DP2 (Dynamic Positioning) system which keeps the ship within specified positions and heading limits.

In addition, the 7,200 gross ton ship has a large loading floor area for project cargoes, including movable tweendeck.

Symphony Provider’s deckhouse is placed on foreship for better protection of deck cargo and enabling to load oversized items over the stern.

The first vessel, Symphony Performer, was launched in October 2016 and delivered to its owner two months later.

This news is a total 1039 time has been read
Tags: Ferus Smit Launches Symphony Provider