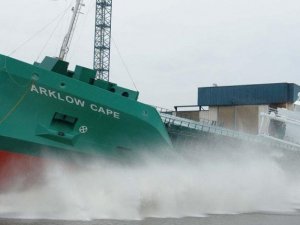 Dutch shipbuilding company Ferus Smit has launched Arklow Castle, the third in a series of ten vessels being built for Ireland-based Arklow Shipping.

The single deck cargo vessel was launched at the shipbuilder’s Westerbroek yard on January 12, 2017.

With a maximized hold volume of 220,000 cft and a carrying capacity of over 5,000 deadweight tons, Arklow Castle has one single hold and a 1A iceclass notation.

Featuring a length of 87.4 meters and a width of 15 meters, the vessel is propelled by a 1,740 kW MaK engine with a single ducted propeller.

Arklow Cape, the second ship from the batch, was launched in October 2016.

This news is a total 629 time has been read
Tags: Ferus Smit Launches Third Arklow Ship