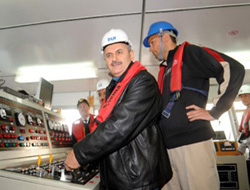 The last section of an underwater railway tunnel that will connect both sides of the Bosporus strait was submerged yesterday during a ceremony attended by Transportation Minister Binali Y?ld?r?m.

The last tube took its placement beneath the Bosporus

The last section of an underwater railway tunnel that will connect both sides of the Bosporus strait was submerged yesterday during a ceremony attended by Transportation Minister Binali Y?ld?r?m.

Y?ld?r?m spoke at the ceremony, which was held at the Ecem Sultan platform from where the tube was being submerged, stating, "We have come to an important phase of the project today." He noted that the length of the last section was 100 meters and weighed 15,500 tons.

"The last section of the tube was placed under water and the 1,400-meter underwater tunnel of the Marmaray Project, which connects Üsküdar and Sarayburnu, was completed. However, the project is not finished yet. The project, which will have three tracks from Sö?ütlüçe?me to Gebze and from Kazl?çe?me to Halkal?, will be finished once it is connected to already existing stations and to new ones that are being constructed; upon completion, we expect that it will be used by 1.5 million residents of ?stanbul," he stated.

The transportation minister also emphasized that this project is not only a public transportation project for ?stanbul but also an important part of the new silk road, as it connects Asia and Europe.

Y?ld?r?m emphasized that the Marmaray Project is a project of firsts in the world in many respects.

Y?ld?r?m noted that another important consideration in the Bosporus is the currents. "There are many currents at the bottom of the strait, and all of them flow in different directions. So you can understand the difficulty of the project."

This news is a total 1148 time has been read