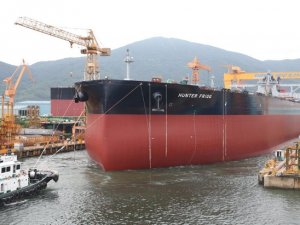 The vessel was delivered by Daewoo Shipbuilding & Marine Engineering (DSME) in South Korea, and marks the end of the company’s newbuilding program.

The company revealed that Hunter Frigg was recently fixed for 6-8 months at $ 40,000 per day, and will commence the time charter following delivery from the yard.

The delivery is being announced on the back of the company’s completion of sale-and-leaseback agreements with SFL Corporation Ltd. that enabled it to repurchase Hunter Atla and Hunter Saga for a combined amount of approx. $ 117.8 million.

Hunter used $ 100.4 million of the $157.5 million loan facility with Danske Bank, DNB, Nordea and SEB to finance the deal.

The company has seven VLCCs in its fleet, which will be managed by  Norwegian ship management company OSM Maritime Group.

However, the shipowner sold one sister vessel in the first quarter of 2020 for $98 million.

This news is a total 2723 time has been read
Tags: dsme , Hunter Tankers , Scrubber