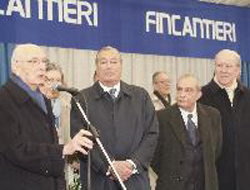 ITALIAN state-owned shipbuilder Fincantieri announced earnings of ?45m for 2007, down slightly on the ?52.4m posted in 2006 but a solid result as the dollar plunges on the foreign exchange markets.

ITALIAN state-owned shipbuilder Fincantieri announced earnings of ?45m for 2007, down slightly on the ?52.4m posted in 2006 but a solid result as the dollar plunges on the foreign exchange markets.

Indeed, Fincantieri said its earnings would have been more than double that figure save for exchange rate fluctuations, estimating the negative impact of currency movements on its 2007 results at a hefty ?50m

Announcing its results in the week that it celebrated the 100th anniversary of its flagship Monfalcone yard, Fincantieri had other reasons to be cheerful as a number of key indicators showed progress on last year.

Production value for the Trieste-based company rose 8.4% to ?2,673m. Fincantieri also garnered a record ?4.2bn in new orders taking the order book to ?12bn or three years" work for its portfolio of Italian yards.

Those new orders included five ships for Carnival group brands, for which Fincantieri is effectively the house builder, among them the 92,000-gt Queen Elizabeth for Cunard.

Other noteworthy scalps included three luxury vessels for Silversea and Oceania, a brace of cruise ferries for Grimaldi Naples, four patrol boats for the Iraqi navy, eight supply vessels for Hartmann Logistic and a second megayacht for an unnamed owner.

In addition, the company substantially increased its investments in its facilities, which rose 63% to ?116m for the year, and pumped a further ?51m into research and development.

Further, substantial investments are on the cards, with management hopeful that a public listing will help provide the bulk of the funding for an ?800m expansion and modernisation programme.

A public quotation has been edging ever nearer for the last two years, despite stiff oppposition on the political left and from one of the three main metalworkers" unions active at Fincantieri yards.

Though the imminence of national elections will doubtless slow the process further, there appears to be broad bipartisan support for a listing.

At the same time, the process may well intersect with ongoing political efforts to craft a joint European response to the STX raid on Aker, with speculation mounting that a recapitalisation and public listing of Fincantieri may be the ideal prelude to a takeover of Aker.

This is a product of fears of an Asian takeover of the cruise business, one of the last redbouts of the European shipbuilding industry.

While this is a question for the future, Fincantieri was also celebrating its past this week, with the celebrations of the centenary of the Monfalcone yard led by Italian president Giorgio Napolitano.

Founded by the Cosulich brothers in April, 1908, Monfalcone has survived to become one of the world"s great cruise shipyards, starting with the Oceanic for Home Lines and the Eugnio C for Costa in the 1960s.

It has now built 24 of the 44 cruise ships constructed by Fincantieri and has been assigned six of the 21 cruise vessels now in its order book.

This news is a total 2383 time has been read