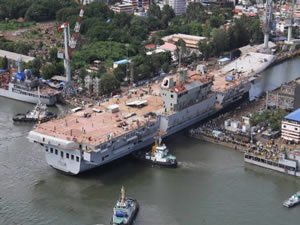 Italian shipbuilding group Fincantieri has landed a cooperation agreement with the leading shipbuilder in India to help modernize the country’s defense fleet.

The Memorandum of Understanding with Cochin Shipyard Limited establishes a framework for cooperation in areas ranging from design, procurement and construction of new military vessels to ship repair, equipment, and training.

The agreement is the latest for Fincantieri in India, having worked with Cochin Shipyard on certain aspects in the construction of the Vikrant, India’s first domestically built aircraft carrier, in addition to some other projects.

“Fincantieri, indeed, has been following the renewal and expansion program of the Indian Navy’s fleet for some time, considering this market as strategic,” the company said in a press release as.

“In the past, the group entered into contracts with [Cochin Shipyard] – to which the Indian Navy awarded the construction of the aircraft carrier Vikrant – for the design and integration of the unit’s engine system, as well as for the supply of complementary services.

Thereafter, Fincantieri delivered the two fleet tankers ‘Deepak’ and ‘Shakti’ to the Indian Navy, in addition to the research vessel ‘Sagar Nidhi’ built for the National Institute of Ocean Technology (NIOT).” Fincantieri said it expects the MoU to be followed by a series of detailed agreements outlining the respective roles and the scope of supply.

Subsidiaries that could benefit from any agreements may include Naval Vessels Division, the Systems and Components Division, as well as Seastema, Vard Marine and Fincantieri India.

Cochin Shipyard has facilities on both the east and west cost of India and specializes in shipbuilding and repair in both the commercial and government markets.