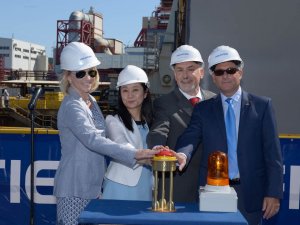 The new vessel, which has been ordered by the Carnival Group for the shipowner Princess Cruises, will go to sea in 2017 and it will be the first vessel to be designed and built specifically for the Chinese market.

With its 145,000 gross tonnage, the ship will host 3,560 passengers and will be built on the basis of the twin vessels “Royal Princess” and “Regal Princess”, built in the same shipyard and delivered in 2013 and 2014, respectively.

These ships represent a new technological benchmark in Europe and worldwide for their innovative layout, their performance and quality.

Carnival Corporation & plc signed a memorandum of understanding (MOU) with Fincantieri S.p.A. to explore the possibility of a shipbuilding joint venture aimed at accelerating development and growth of the cruise industry in China in November, 2014.

The MOU between Carnival Corporation and Italy-based Fincantieri outlines the framework for evaluating and exploring a potential shipbuilding joint venture for constructing cruise ships for the Chinese market.

The Chinese Ministry of Transport (MOT) projects China to be the second largest global cruise market after the U.S. in the next several years based on economic growth, increased spending power of Chinese consumers and growing demand for cruise vacations. China could see 4.5 million cruise passengers by 2020, according to the MOT, and is expected to eventually become the world’s largest cruise market.

Fincantieri has 14 ships currently being designed or built in the group’s yards.