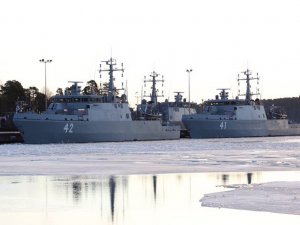 The navies of Finland and Germany kicked off a mine countermeasure exercise in the Gulf of Finland on October 16. The two-day drill is designed to enhance the interoperability between the two countries’ explosive ordnance disposal divers.

Participating units from Finland include the minehunter MHC Vahterpää together with the staff of the 4th Mine Countermeasures Squadron and the navy diving school of the Coastal Brigade. Germany has deployed diving support vessel FGS Rottweil to take part in the exercise. The German ship is scheduled to berth at Helsinkifollowing the conclusion of the exercise but will not be open for public.

Katanpää-class mine countermeasure vessels are a class of three multipurpose mine countermeasure vessels (MCMV) ordered by the Finnish Navy. The nearly 250 million euro contract was awarded to the Italian shipyard Intermarine S.p.A. in 2006. Initially, all three vessels were scheduled to be delivered by 2014 and the class was expected to achieve operational readiness by 2015, but there have been various delays and the last vessel was handed over to the Finnish Navy in November 2016.

The Katanpää-class mine countermeasure vessels are constructed of laminated composite materials. They are 52.45 metres (172.1 ft) long and have a beam of 9.47 metres (31.1 ft) and a draft of 3.15 metres (10.3 ft). The hull, decks and bulkheads are made of fibreglass, which in places are up to 150 millimetres (5.9 in) thick. The decks are additionally reinforced with balsa and carbon fibre. This improves shock resistance against underwater explosions and reduces the vessels' magnetic, noise and pressure signatures that could detonate the mines.

The low-signature diesel-electric propulsion system consists of two MTU 8V-396-TE74 high-speed diesel engines, each producing 1,000 kW (1,300 hp), and two Voith Schneider propellers. The Katanpää-class vessels are designed to operate in archipelagoes, coastal regions and open seas, and are capable of operating in ice. They will have a service speed of 13 knots (24 km/h; 15 mph) and a maximum range of 1,500 nautical miles (2,800 km; 1,700 mi).

This news is a total 643 time has been read
Tags: The navies of Finland and Germany kicked, Finnish and German Navy hone EOD skills in Gulf of Finland