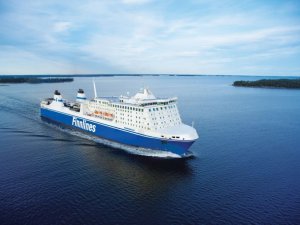 Last year was profitable for Grimaldi’s RoRo and passenger company Finnlines despite a decline in cargo volumes.

Result before interest and taxes (EBIT) amounted to EUR 104.8 million in 2019, against EUR 104.9 million posted a year earlier.

“The result of the fourth quarter was negatively affected by the strikes and supporting actions causing a decline in cargo volumes as well as cancellations of vessel departures,” the company explained.

During the reporting period, Finnlines operated on average 20 vessels in its own traffic.

At the beginning of January 2019, Finnlines redelivered MS Finncarrier from a temporary bareboat charter arrangement back to its owners, when the last lengthened vessel, MS Finnsea, returned to traffic after conversion at the end of 2018. Since then all six lengthened vessels of the Breeze series have been deployed in Finnlines traffic.

Finnlines reshuffled its Biscay–Russia services in the middle of April and at the same time, MS Finnsea was chartered out to the Grimaldi Group.

In November, several sailings were canceled nearly in all traffic areas due to the postal strike in Finland and the seven-day supporting action of Finnish Seafarers’ Union FSU. The main impacts hit the Helsinki–Travemünde and Naantali–Kapellskär traffics. The Industrial Workers Union’s strike lasting three days followed by a six-day lockout in the mechanical forest industry in December also affected cargo volumes negatively in Finnish traffics, the company explained.

In conjunction with the financial review for 2019, Emanuele Grimaldi, President and CEO, commented:

“In 2019, we continued to focus on fundamentals, i.e. dedication to smart use of technology, digitalised and optimised processes across our businesses, investments in energy efficiency to advance sustainable development… One topic in our strategic discussion is digitalisation. In recent years, we have invested a lot in information technology.”

“Finnlines welcomes the IMO’s GHG strategy and its goal to reduce carbon dioxide emissions…we have invested heavily during the past decade: in a new, technologically advanced tonnage, in R&D that supports emission reduction equipment and operations, but also in the highly skilled personnel. Above all, we have ordered five ultra green generation vessels, three green hybrid RoRo vessels and two eco-efficient Superstar RoPax vessels which represents a total investment worth EUR 0.5 billion.”

“We will continue to deploy larger and larger vessels in order to benefit from economies of scale. Moreover, increased capacity on our vessels has reduced CO2 emissions per transported tonne,” he continued.

“Looking to 2020 and beyond, we will continue on our path, and make the right investments in line with our strategy.”

This news is a total 72747 time has been read
Tags: earnings, Finnlines.