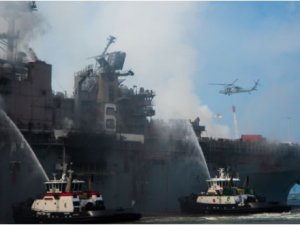 The fire aboard the U.S. Navy amphib USS Bonhomme Richard continued to burn Monday morning, more than 24 hours after the ship's crew reported a blaze in a lower vehicle hold.

Overnight, the three-alarm fire burned through parts of the ship's island, the heart of her command and control systems. Photos from Sunday night showed flames on the bridge, and by Monday morning, the forward mast had collapsed.

The vessel was undergoing a refit alongside the pier at the time that the fire broke out. According to Rear Adm. Philip Sobeck, commander of Expeditionary Strike Group 3, the firefighting effort has had to deal with two challenges that would not affect the vessel at sea. First, Bonhomme Richard's halon fixed firefighting system is offline due to the ongoing repair and modification work. Second, some interior compartments are crowded with scaffolding and equipment related to the refit, making access difficult.

"Fighting a major fire on a ship undergoing heavy maintenance is a nightmare. You have both limited crew at the start, and the ship's compartment boundaries, which are critical for containing fires, are often compromised. Not to mention combustible work tools/supplies everywhere," commented Matthew Collette, an associate professor of naval architecture at University of Michigan, in a social media post.

Hundreds of Federal San Diego Fire and Navy first responders are involved in combatting the blaze, and all vessels in port at Naval Base San Diego have been ordered to supply fire teams for the effort. In addition, the Navy has deployed helicopters with water buckets to fight the fire from above, plus tugs with fire monitors to apply cooling water to the hull. Bonhomme Richard is listing slightly due to accumulation of firefighting water, but Adm. Sobeck said that the Navy is monitoring her stability closely.

57 crewmembers and civilians sustained minor injuries Sunday, including smoke inhalation and heat exhaustion. Rear Adm. Sobeck said that the lack of more serious personal injury came down to the crew's training and experience.

As of Monday morning, fire teams were converging on a hot spot towards the vessel's bow. The heavy dark smoke emerging from the vessel amidships had largely subsided, and Rear Adm. Sobeck said that the toxicity of the emissions are "within EPA standards."

The vessel is not carrying bombs or other heavy munitions, but her tanks are filled with about one million gallons of fuel. The possibility of the fire burning down far enough to reach the tanks is "absolutely a concern," Sobeck said, and he emphasized that the firefighting teams are making every effort to prevent it. At present, there are about two deck levels between the blaze and the tank top, he said.

The devastating extent of the fire raises questions about the 22-year-old vessel's future and the cost-effectiveness of a restoration. A replacement built to the more modern America-class amphib design would cost roughly $4 billion.

Long before the fire, the Navy had discussed accelerating the procurement of the next planned America-class amphib (LHA-9) to FY2023. However, a tranche of $650 million in early  funding for that purpose has been diverted for "DHS counter-drug activities, commonly reported to mean the construction of the southern border wall," according to the Congressional Research Service.