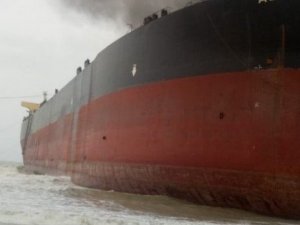 Three months after authorities gave the green light for tanker beachings to resume at Gadani, Pakistan, another fire broke out aboard a decomissioned VLCC, trapping several workers inside the burning hull.

Three months after authorities gave the green light for tanker beachings to resume at Gadani, Pakistan, another fire broke out aboard a decomissioned VLCC, trapping several workers inside the burning hull.

Local sources report that the fire broke out during demolition work. 20 laborers were rescued, but four are believed to be trapped within the vessel.  National Trade Union Federation (NTUF) leader Nasir Mansoor said in a social media update that 100 workers were at the site at the time of the incident.

Gadani's shipbreakers have experienced multiple fires resulting in loss of life in recent years. These incidents included a fuel tank explosion aboard the FPSO Aces in November 2016, which killed at least 26 workers and wounded 58, and a second fire aboard the same vessel in November 2017. Separately, a fire broke out on an unnamed LPG carrier in December 2016, and then a second time in January 2017, with five fatalities and an unknown number of missing workers during the second incident. The deadly blazes resulted in a temporary ban on tanker scrapping at Gadani, which was lifted in April 2018.

Labor rights advocates assert that shipbreaking is Pakistan's deadliest industry, with little regulation and inhumane working conditions. "Even jungles would have some laws, but there are none here," alleged Mansoor, in comments to Pakistan's Express Tribune.

Norway's sovereign wealth fund recently excluded four shipowners from its portfolio for selling end-of-life vessels to Pakistani and Bangladeshi shipbreakers, citing a pattern of "severe environmental damage and serious or systematic violations of human rights." Demolition brokerage GMS contests this characterization and asserts that the industry is making improvements, especially at yards that are pursuing certification to Hong Kong Convention ship recycling standards.

This news is a total 726 time has been read
Tags: Fire at Gadani as Tanker Scrapping Resumes