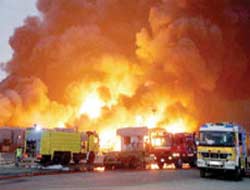 Firefighters managed to bring under control within three hours a blaze that ravaged a chemical storage depot at Jebel Ali Port in Dubai early yesterday.

Firefighters managed to bring under control within three hours a blaze that ravaged a chemical storage depot at Jebel Ali Port in Dubai early yesterday. Although the fire triggered explosions and sent thick smoke billowing into the sky, there were no casualties.

The fire did not disrupt shipping because it was not near the quays of the port. A police officer at the port said the cause of the fire was not immediately known and the extent of the damage was currently being investigated. Brig. Rashid Thani Al-Matroushi, director of Dubai Civil Defense Department, said the fire erupted at the chemical storage facility spanning 8,000 square meters.

“The firefighting teams doused the flames after the fire began in the center of the store,” he said. “Nearby fire hydrants helped in extinguishing the fire. There were explosions, sending debris up to 300 meters in the air. The depot stored about 25,000 barrels of combustible material and bags of chemical powder.”

A statement from the Civil Defense Department said the central operations room was alerted about the fire at around 4 a.m. “Firefighters from the centers of Al-Quz, Karama and Jumeira managed to contain the blaze and prevented it from spreading to nearby sites by 7.15 a.m.,” the statement explained.

Eyewitnesses said that firefighters were trying to put out the blaze until midday yesterday. “I work in the Jebel Ali Free Zone and on my way to the office around 7 a.m. I saw thick smoke,” said A.A. Rahman.

“My office is at one-and-a-half kilometers to this site in Jebel Ali and we had a clear view through our office window. We could see thick black smoke coming from the site until 11.30 a.m. But by around 1 p.m. it was clear,” said Abdul Nasir, an employee at Jebel Ali Port.

The Jebel Ali Free Zone provides warehousing and distribution facilities to thousands of international and local companies. The port has the UAE’s second biggest oil refinery. “The refinery operations were not affected,” said a spokesman for Emirates National Oil Company, which runs the 120,000-barrels per day facility.

Meanwhile, Ahmed Abdul Hussain, the director of Dubai’s Environment, Health and Safety Regulatory Authority said there was no noticeable environmental damage. “The air quality and toxicity levels are being monitored. There is no cause for alarm,” Hussain said.

After a thorough analysis of samples from plumes of thick black smoke sent into the sky following the fire outbreak, no noxious elements were found and work resumed in the afternoon. The suspension of the operations did not affect cargo handling services at the port.

This is the second fire to hit a UAE port in recent weeks. On Aug. 18, Sharjah’s Port Khalid was closed for seven hours after a fire at a lubricants warehouse. The Emirates Lube Oil Company whose warehouse was reduced to ashes at Port Khalid on that day, lost over 300 million dirhams. There were no casualties.

After the Port Khalid fire, the UAE Interior Ministry had announced that businesses in the country which do not maintain adequate fire safety standards would be forced to pay the cost of putting out any blazes that occur on their premises.

This news is a total 2521 time has been read