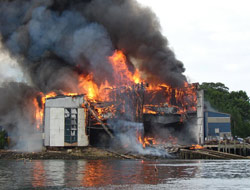 According to press reports, two tugboats that were in the building were severely damaged. A third, that was afloat, was saved.

Press reports say Investigators from the state fire marshal's office believe that the blaze started near one of the tugboats that was under construction in the building, but have yet to determined the cause.

A 47-foot motor lifeboat from Station Boothbay Harbor transported firefighters around the shipyard so that they could access areas they otherwise couldn't reach. Additionally, a 25-foot response boat enforced a safety zone around the shipyard.

Though no workers were reported injured, about 200 homes and businesses near the.yard were evacuated.

Speaking to media Friday , Governor Baldacci said he had spoken to Bruce Washburn and Bruce Doughty, the owners of the shipyard.

"They say the building is a complete loss, perhaps $30 million in damage," the Governor said. "This fire has been devastating to this quality company, and we will do what we can to help them rebuild and re-open. They are an important part of our economy and a significant employer in the region."

The Governor outlined steps the company and the State are taking in response to the fire. "The owners tell me they will meet with their workers on Monday and a Department of Labor Rapid Response team will be there to help the employees at 7 that morning," said the Governor. "We have an economic and community development specialist with the owners working on recovery efforts."

The Commissioner of the (DECD) is on his way to East Boothbay.