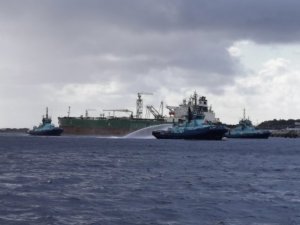 A Liberian-flagged tanker caught fire while moored at the Sture terminal in Norway on September 13.

According to Norwegian oil major Equinor, the fire broke out in the engine room of the 2005-built tanker Dubai Harmony.

The ship’s captain has reported that all the 23 people aboard the ship have been accounted for.

Equinor further said that there were 102 people at the Sture terminal at the time of the incident. Everyone not involved in the response to the fire has been evacuated from the terminal as a

precautionary measure, it was added.

The company did not provide additional information on possible causes of the fire.

The Norwegian police said the fire had been extinguished but a traffic ban in a radius of one nautical mile is in place until further notice.

The crude oil tanker arrived at the Sture terminal in the early morning hours of September 13, according to AIS data from MarineTraffic.

Equinor noted that the incident did not affect the terminal’s output.

This news is a total 225 time has been read
Tags: Equinor, fire, Sture terminal, Tanker SEA\LNG: 175 LNG-Fueled Ships in Operation, 203 on OrderThere are 175 LNG-fueled ships currently in operation, with 203 on order and a further 141 LNG-ready vessels in operation and sitting on the order books, according to the latest figures from SEA\LNG, a UK-based multi-sector industry Stranded Tankers and Full Storage Tanks: Coronavirus Leads to Crude Glut in ChinaThe coronavirus’s effect on energy markets is worsening, as the sharp fall in demand in China, the world’s largest importer of crude, is stranding oil cargoes off the country’s coast and prompting shippers to seek out other Asian destinations.