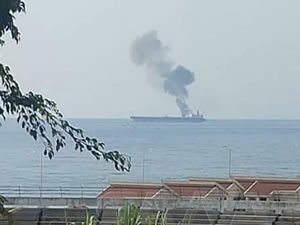 The coastal town of Baniyas houses a refinery, which along with another in Homs, covers a significant part of Syrian demand for diesel, heating fuel, gasoline and other petroleum products, according to industry experts.

Syria's oil ministry said on Saturday that firefighting teams extinguished a fire on an oil tanker off the oil terminal of Baniyas after a suspected drone attack from the direction of Lebanese territorial waters, state media reported.

The coastal town of Baniyas houses a refinery, which along with another in Homs, covers a significant part of Syrian demand for diesel, heating fuel, gasoline and other petroleum products, according to industry experts.

State news agency (SANA), which cited the oil ministry, gave no further details about what it said was a suspected drone attack.

The sanctions-hit, war-torn country has over the past year faced gasoline and fuel shortages, rationing supplies in government-held areas and hiking prices.

Syria's Ministry of Oil and Mineral Reserves stated that a fire broke out on an Iranian-owned oil tanker following a suspected drone attack, state media reported .

According to the statement, the attack is thought to have come from the direction of Lebanon's territorial waters and been carried out via drone.

After the fire broke out, firefighting teams were called and they managed to successfully extinguish the fire on the tanker which is currently floating off the coast of Baniyas.

Product tanker WISDOM, anchored off Baniyas, Syria, suffered explosion followed by fire in one of cargo tanks during wielding works on Apr 24.

Three people were killed by explosion, including two crew and one worker, according to Syrian authorities. Fire was extinguished same day.

Many news agencies so far, believe explosion and fire were the result of Israeli missile or drone attack, but presence of worker on board confirms Syrian official version.

WISDOM is understood to be deployed, at least occasionally, as a lighter tanker, to offload crude oil from VLCC tankers, and to deliver it to Baniyas Refinery, with local workers involved in maintenance when need arises.

Baniyas waters area is a black hole, with regards to tankers’ AIS. All tankers operating in these waters switch their AIS off.

Last AIS position of WISDOM was recorded some two months ago, northeast of Cyprus.