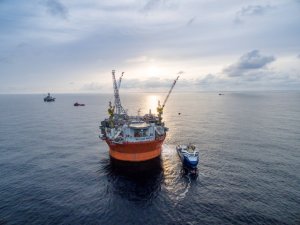 The world's northernmost oilfield was shut on Friday when a fire broke out in a sauna in the oil platform's living quarters, Eni, the Italian oil company that operates the field, said.

The Arctic Goliat field is in the Barents Sea about 88 kilometers off the coast of Norway and inside the Arctic Circle. The platform has floating production, storage and offloading facilities and can produce close to 100,000 barrels of crude per day.

The fire was quickly put out, and no crew members were injured, although some smoke did develop, Eni said.

"All safety procedures worked appropriately: the production was shut down and the crew mustered to the lifeboats," the company said in a statement. Eni said the rig has a crew of about 120 people.

Output from the platform remains shut and it was not yet clear when it will resume, a company spokesman told Reuters. The spokesman also said it was quite common for offshore oil rigs to have saunas.

The Goliat field has had a series of problems and has been shut several times because of technical glitches, including a more than two-month outage in late 2017.

Eni owns 65 percent of the field while Norway's Statoil owns the remaining 35 percent.

This news is a total 848 time has been read
Tags: Fire in Sauna Shuts World's Northernmost Oilfield