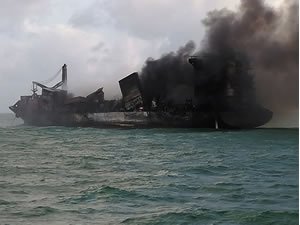 A fire that has burned on board the MV X-Press Pearl for over a week off Colombo, Sri Lanka has nearly burned itself out.

Firefighting operations have further reduced the area affected by flames to small spot fires in the aft of the ship, according to an update Sunday from the ship’s operator, X-Press Feeders.
Firefighting tugs will continue spraying and misting the vessel with support from the Sri Lankan Navy and Indian coastguard, who remain on scene. Salvors are also exploring the possibility of boarding the ship and making a tow connection so it can be moved, the company said.
“As of 1100 Hours on May 30, 2021, Sri Lankan time, the salvors have confirmed that the vessel’s hull remains structurally intact, and there has been no loss of oil into the port’s waters,” the update said.
The ship remains anchored at an anchorage 9.5 nautical miles off Colombo, where the ship initially caught fire on Thursday, May 20.
There were 1486 containers on board when the fire started, of which 81 were reported as Dangerous Goods Containers, including 25 tonnes of Nitric Acid. Although the cause of the initial fire is still under investigation, a container that was leaking nitric acid was identified prior to its arrival in Sri Lanka waters.

“The ship underwent discharge and loading operations in both Hamad Port in Qatar and Hazira Port in India before continuing on its planned journey to Colombo.

Applications had been made to both ports to offload the container that was leaking nitric acid, but the advice given was there were no specialist facilities or expertise immediately available to deal with the leaking unit,”

The vessel was also carrying 297 tonnes of Heavy Fuel Oil and 51 tonnes of Marine Fuel Oil.
SMIT Salvage is the appointed salvor.
X-Press Pearl’s 25 crews members were evacuated from the ship. Two were reported injured, one of which later tested positive for COVID-19.
“The crew member who was transferred to a special facility in a military hospital after testing positive for Covid-19 remains asymptomatic and continues to recover from the leg injury. A second injured crew member continues to recover from his injuries in a local hospital. All other crew members who remain in a Colombo quarantine facility are in good health and are in contact with their families,” today’s update said.
Firefighting has been ongoing using tugs with the assistance of Sri Lankan Navy helicopters and vessels and two Indian Coastguard vessels.
“We remain fully focused on the ongoing firefighting and salvage operation and will co-operate with the relevant investigations into the cause of the fire,” the update said.
The X-Press Pearl was only recently delivered in February.