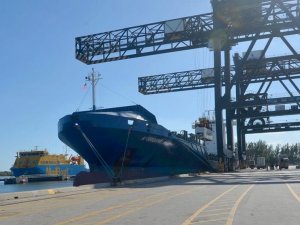 The first commercial cargo legally imported into United States from Cuba in more than five decades arrived in Port Everglades, Florida on Tuesday.

The cargo, just two containers of “artisanal” Cuban-produced charcoal, arrived aboard the Crowley Maritime containership M/V K-Storm. It marks the first legal commercial shipment from Cuba to a private U.S. business since the U.S.-Cuba trade embargo was imposed in 1962.

The shipment is legal under executive orders by former President Obama seeking to normalize the United States’ relationship with Cuba and ease trade, travel and financial restrictions imposed under the embargo.

The Trump administration has yet to make any formal decision on U.S.-Cuba policy, but President Trump has vowed to scrap Obama’s executive orders if he doesn’t “a better deal”.

The Cuban import comes as a Cuban trade delegation visits the United States this week to explore possible trade opportunities with port authorities along the U.S. East and Gulf coasts.

Crowley has been operating its Cuba service since December 2001 after the company obtained the first license from the U.S. Department of the Treasury to provide regularly scheduled common carrier services for licensed cargo from the United States to the Republic of Cuba under the Trade Sanctions Reform and Export Enhancement Act of 2000. Crowley has maintained a regularly scheduled service ever since, currently operating from Port Everglades in Florida.

This news is a total 1154 time has been read
Tags: First Cuban Import in Five Decades Arrives in United States Aboard Crowley Cargo Ship