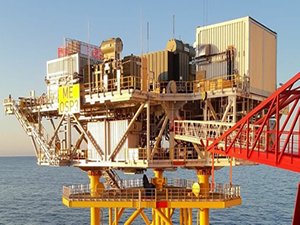 The modular topside, which contains all of the electrical infrastructure to transmit the electricity generated by the offshore wind turbines, was installed on a three-legged jacket structure, which was previously installed on the seabed.

The top-side was installed using Seajack’s jack-up vessel Scylla, having previously loaded it on board from Global Energy’s facility at Nigg.

The 1,200-tonne topside contains all the essential electrical equipment including transformers and switchgear to transmit the electricity generated by roughly one third of the 100 offshore wind turbines, and increase its voltage from 66 kV to 220 kV so that it can be delivered through the export cable to shore with maximum efficiency and minimum losses.

In total, three offshore substation platforms will be installed in the next couple of weeks. The offshore campaign continues with more and more activities to allow energisation next year.

The electricity will come ashore at Inverboyndie and will then be routed via underground cables to the Moray East substation at New Deer from where the electricity is fed into the grid.

Moray East has also confirmed that the first export cable has made landfall at Inverboyndie.

To minimise environmental impact, the cable was pulled through an underground duct which runs from a point on the shoreline between Inverboyndie and Whitehills, below the coast, beneath the seabed, and out to a point in the sea around 1 km from the coast.

The cable was pulled from NKT’s cable-laying vessel, Victoria, and will be one of three which will take power from the offshore windfarm via underground cable to the new electricity substation on the national electricity transmission grid.