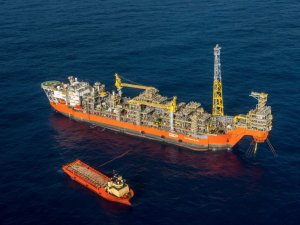 The FPSO Pioneiro de Libra (Libra), has achieved first oil and commenced its 12-year charter contract with a group of international oil companies, including Petrobras, Total, Shell, CNPC and CNOOC Limited, on the Libra oil field where it will perform early well tests. The Libra FPSO unit is the first unit to produce oil on the giant Libra block, which covers more than 1,500 square kilometers in the Santos Basin.

The Libra FPSO is owned and operated by Teekay Offshore and Odebrecht Oil and Gas (OOG) through a 50/50 joint venture. The FPSO unit, which was converted from one of the Partnership’s shuttle tankers at Sembcorp Marine’s Jurong shipyard in Singapore, is designed to operate at water depths of up to 2,400 meters, with a production capacity of 50,000 barrels of oil per day and daily compression capacity of four million cubic meters of gas.

This news is a total 702 time has been read
Tags: First Oil and Contract Start-up for Libra FPSO