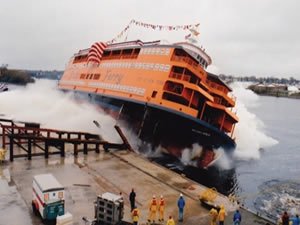 Once engineers from the German propulsion company Voith are able to inspect her cycloidial drive system, the first-in-class Staff Sgt. Michael Ollis will be able to make her way up the East Coast and enter service in New York Harbor.

The first of three new vessels for the Staten Island Ferry system is nearing delivery after a long series of delays.

Once engineers from the German propulsion company Voith are able to inspect her cycloidial drive system, the first-in-class Staff Sgt. Michael Ollis will be able to make her way up the East Coast and enter service in New York Harbor.

The Ollis was originally scheduled for delivery in the fall of 2019, but she was damaged during Hurricane Michael - a rare Category Five storm that hit the Florida Panhandle in October 2018.

The Ollis was fixed over the course of 2019, and a final inspection by Voith engineers was scheduled for early 2020.

However, the travel shutdown caused by the COVID-19 pandemic interfered with the plan, and the German engineering team was not able to fly to the U.S. to conduct a site visit.

That obstacle has delayed the delivery, but the partners have found a workaround.

After intervention from Rep. Max Rose, the congressional representative for Staten Island, the Voith team was able to secure an exemption and visit the shipyard.

They arrived at the end of October, and their inspection is expected to take about one month, according to Staten Island Live.

TThe three Ollis-class ferries will be able to carry 4,500 passengers, and they are built to a design from Elliot Bay Design Group.

Like the previous Barberi-class, they are fitted with dual cycloidial drives for maneuverability.

Their namesake, Staff Sgt. Michael H. Ollis, was a Staten Island native who was killed in Afghanistan in 2013 during Operation Enduring Freedom.

Eastern Shipbuilding has been busy over the two years since the storm struck:

it has delivered at least five vessels, launched the second hull in the Ollis-class series, and initiated construction on two new Offshore Patrol Cutters (OPCs) for the U.S. Coast Guard.

The OPC is the service's highest-priority acquisition program and the largest in its history by contract value; ESG is building the first four hulls in the series.