First shipment from Libra field offshore Brazil will be delayed 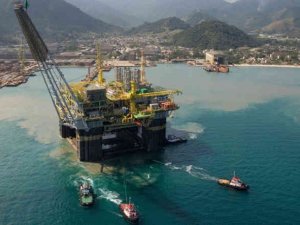 Brazil has postponed by some weeks its expected first oil shipment from the giant Libra pre-salt field in the Santos Basin, according to Reuters.

Previously forecast for this month it has now been shifted back to some time in the first quarter of 2018, says Hercules Tadeu F. da Silva, contract management director at state-run Pre-Sal Petroleo SA, which was formed to guide Libra's development. No reason was given for the delay.

Libra was the first subsalt reservoir sold under Brazil's production-sharing regime whereby foreign companies were welcome to invest in and develop hydrocarbon projects.

It specified that state oil firm Petrobras must be the operator and hold at least a 30% stake in any consortium, while the partner firms must bear all the risk.

Petrobras has a 40% operating stake in Libra. Anglo-Dutch multinational Shell and French giant Total each have 20% stakes. And Chinese firms CNOOC and CNPC have 10% each.

This news is a total 809 time has been read
Tags: First shipment from Libra field offshore Brazil will be delayed