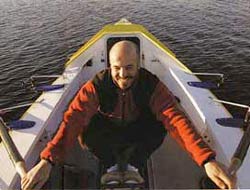 Erden Eruc, who is the first Turk to cross the Atlantic Ocean by boat, is preparing to cross the Pacific Ocean, as part of "Six Summits" project.

Erden Eruc who is the first Turk to cross the Atlantic Ocean by boat, is preparing to cross the Pacific Ocean, as part of "Six Summits" project.

Eruc who will start his ride in May from San Francisco by bicycle, will get up the anchor in Seattle in July to sail towards Australia.

The journey that is taking place with the sponsorship of Aktas Group is expected to last for 7 months. Eruc will cover 12.4 thousand kilometer distance through the Pacific, and is expected to reach eastern coast of Australia in the beginning of 2008.

Eruc became the first Turk to pass the Atlantic Ocean with oars in 2006.

Erden Eruc is the creator of the "Six Summits" Project, in the framework of which he will climb the highest summits on five different continents (except the South Pole) by human power, cross the oceans by rowing and travel to the highest peak on that continent by bicycle.

The non-profit charitable organization Around-n-Over will produce news and educational content about the journey as it unfolds, and will share its know-how for future human-powered challenges of similar nature.

Eruc completed the first summit of his six summits project by climbing McKinley summit in Alaska, USA in 2003.