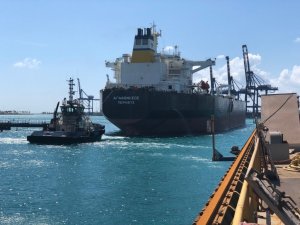 The 57,062-ton crude oil tanker Agathonissos, owned by Greece-based Eletson, returned to the yard to complete repair works that began before the hurricane arrived in the Bahamas earlier this month.

The shipyard also said it remains on track for the next planned cruise ship visit, Carnival Cruise Line’s Carnival Ecstasy, scheduled to arrive on October 5.

In total, Grand Bahama Shipyard expects to service 29 dry-dockings throughout the remainder of the year.

The shipyard said that the damage from the storm was limited primarily to some erosion with no effect on berths, adding that it is able to fully power its core operations, including docks, workshops and administrative functions, as well as communications infrastructure.

This news is a total 220 time has been read
Tags: Grand Bahama, Hurricane, Hurricane Dorian.