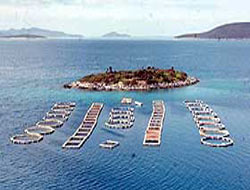 A law that would have closed more than half of Turkey's controversial fish farms has been overturned by the Council of State in a decision to be made public later this week, the Turkish Daily News learned yesterday.

A law that would have closed more than half of Turkey's controversial fish farms has been overturned by the Council of State in a decision to be made public later this week, the Turkish Daily News learned yesterday.

The rise of fish farming in Turkey's coastal waters over the past two decades has pitted the burgeoning industry against environmentalists and a recent law proposed moving more than 150 farms accused of fouling the sea and beaches further offshore. Just what happens next remains unclear, but the result of the decision means the farms will continue to operate at least through the current tourist season.

“We have been expecting a such decision,” said Erdal Seferbay, chairman of the Aquaculture Association. “The application of the law was impossible in practice.”

Environmentalists, however, labeled the decision short-sighted. “This is a long-term mistake for a short-term profit,” said Bilge Contepe of the Turkish Greens movement.

The cancelled law stipulated that fish farms could not be established in protected natural and archaeological sites and in places less than 1.1 kilometers from the shore, more shallow than 30 meters and where the momentum flow was less than one meter per second.

Industry officials complained that the ministry of forestry and fisheries, which had proposed the ban, had not consulted academics or non-governmental organizations on the matter at all but the decision was presented fait accompli.

Seferbay said that implementing the law as proposed would have closed 163 fish farms out of a total of 236 and cost 45,000 tons of the current annual production of 65,000 tons. The sector, he said, is vitally important for Turkey. While European countries are trying to improve fisheries and increase their shares in the world markets, the decision would have reversed Turkey's growing share of the market.

Contepe, however, said efforts to curtail fish farming will continue.

“We oppose fish farms occupying the coasts; but we also oppose five star hotels flourishing in the area. Coasts are public places that are to be nationalized. They must not be monopolized,” said Contepe.

“We strongly oppose the coasts to be plundered. The government seems to be ignorant about environment. Fish farms occupy the Aegean and the Mediterranean coasts. Around the world fish farms are closed in the summer and they work off shore in the winter. The way the business is run here in Turkey exploits nature. What is wrong is that the law is simply supporting political powers. This decision is a farewell to the shores. Our protests will continue.”

This news is a total 657 time has been read