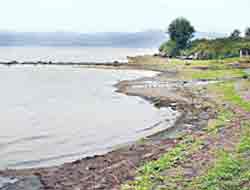 Some species of fish are now extinct due to heavy pollution in Sapanca Lake, one of the few lakes in the world that supplies potable water.

Some species of fish are now extinct due to heavy pollution in Sapanca Lake, one of the few lakes in the world that supplies potable water.

A study by the Sapanca Association of Hunters and Fishermen revealed that perch, freshwater eel and crayfish have become extinct in Sapanca. Pike and carp are also faced with the threat of extinction. Although fishing is prohibited in the lake, the level of pollution alone is enough to drive some species of fish to extinction. To counter this poisonous effect, the water is now being purified before being transferred to the city water network.

The pollution in Sapanca Lake stems from the highways that surround it and improperly disposed of domestic and industrial waste. With rising global warming, there is less rain -- a direct effect on the lake being unable to replenish itself. Plus, rivers supplying water to the lake are overused by local companies, so the lake is not getting enough water from within.

If the pollution continues in Sapanca Lake, the lake will become, like the ?stanbul Küçük Çekmece Lake, a slough, said Sava? Ayberg, a professor of environment at Kocaeli University.

Sedat B?çakç?, head of the Sapanca Association of Hunters and Fishermen, said the disappearance of some fish in the lake is not a myth. “It is a fact,” said B?çakç?, and pressed for prompt action to save the lake from further pollution.

This news is a total 646 time has been read