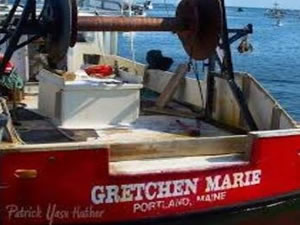 A crewmember aboard the 40-foot fishing boat Gretchen Marie contacted watchstanders at Coast Guard Sector Northern New England at about 7:40 p.m. Wednesday reporting a fire onboard and heavy smoke in Gretchen Marie's pilothouse. Two men were aboard the vessel.

Station South Portland launched a 47-foot Motor Life Boat, which arrived on scene and removed the two unharmed fishermen. A MH-60 Jayhawk helicopter crew from Air Station Cape Cod was dispatched for support. The Gretchen Marie crew had put out the engine fire with their onboard fire-fighting equipment. After the scene was secured, the MH-60 departed the area and Station South Portland placed the vessel in tow. By approximately 11:20 p.m., the Gretchen Marie anchored just outside its homeport in Portland, where a Portland Fire Boat assessed the vessel.

"The Gretchen Marie crew handled the emergency flawlessly, the crew had the proper safety equipment onboard, quickly responded to the fire, and notified the Coast Guard of the emergency,"  said Petty Officer 1st Class Kurt Hein, a watchstander at the Sector Northern New England command center. “The fishermen and Coast Guard crews exhibited great team work and professionalism, ensuring the safety of the crewmembers.”