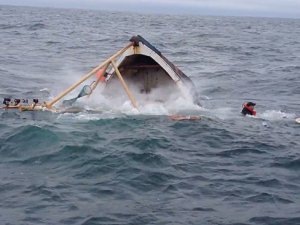 The both vessels were on parallel courses, but fishing boat suddenly change course towards tanker. The duty officer of Victory Prima has no time for reaction and to maneuver. The both vessel collided, which caused sinking of the fishing boat Jaya II. The crew of the product tanker Victory Prima succeeded to rescue three from the fishermen, but one went missing. The accident was reported to the local authorities and started SAR for the missing fisherman. The tanker was ordered to anchor during the investigation.

According to fishermen evidences and preliminary information, the fishing boat suffered rudder failure and crossed the route of the tanker. The both vessels were too close and there was no time for reaction. The tanker was en route under ballast from Belawan to Dumai and during the accident was just leaving the port. The vessel did not suffered any damages, but was detained during the further investigation and estimation of the responsibilities in the accident.

The product tanker Victory Prima (IMO: 8126082) has overall length of 100.50 m, moulded beam of 16.00 m and maximum draft of 4.50 m. The deadweight of the ship is 5,989 DWT and the gross tonnage is 3,570 GRT. The tanker was built in 1982 by Shin Kurushima Hiroshima Dockyard in Japan. The owner and operator of the vessel is Indonesian company Citra Bintang Samudra Line.

This news is a total 3672 time has been read
Tags: Fishing boat Jaya II sank after collision with product tanker Victory Prima in Malacca Strait