Fishing boat sinks off Istanbul coast after colliding with tanker 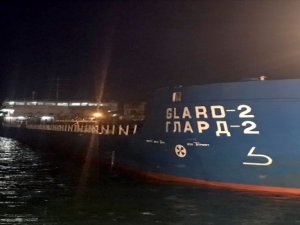 In a statement, the Istanbul Governor's Office said the fishing boat Dursun Ali Coşkun sank after colliding with the Russian-flagged oil tanker, Glard-2 off of Istanbul's Kilyos shore, where the Bosporus meets the Black Sea.

The statement added that three of the six crew members were rescued by other fishing boats nearby, while rescue teams launched search efforts to locate the three missing.

while approaching the anchorage north of Kilyos, Istanbul. five miles off the Turkish coast.

The tanker was en route from Rostov-on-Don to Izmir.

The fishing vessel sank within a few minutes, three of the six crew members were rescued by nearby other fishermen.

For the three missing, an SAR operation was launched by the Turkish Coastguard with the lifeboats 'Kiyem 5' and 'Kiyem 8' and the patrol boats 'SG-KB7427', 'KB-4318', 'TCSG-71', 'TCSG-906' and 'TCSG-505' as well as helicopters and divers and fishing boats in the vicinity. Heavy fog may have contributed to the accident.

The tanker anchored at the Istanbul Strait North Entrance.