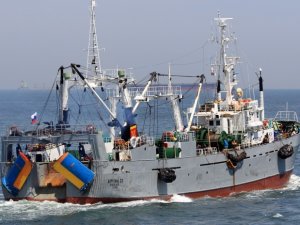 The fire erupted after short circuit in ice generator, which extended to the engine rooms and main deck. The accident was reported to the local authorities and the crew requested assistance due to immediate danger for their life. The trawler yantar-1 was the first, which responded to the distress signal, where were evacuated 39 people out of 52 crew, most of them being non-essential for the firefighting. The other 13 crew remained on board of the fishing ship Carolina 33 and continue firefighting. The local authorities sent also the salvage tug Sibirskiy at the scene of the troubled vessel to assist.

There are no additional details about the extent of the fire and the damages caused to the fishing ship. According to preliminary information, there is danger for the seaworthiness of the fishing vessel Carolina 33. The investigation for the root cause of the accident is under way. Fortunately during the fire there are no reports about injured seamen and no water pollution.

This news is a total 819 time has been read
Tags: Fishing vessel Carolina 33 caught fire in Okhotsk sea