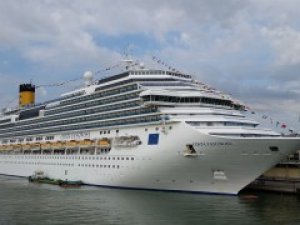 Costa Cruises confirmed that five guests, 4 Italians and 1 Russian, of the Costa Fascinosa are among the victims of the horrific attack that took place on March 18th at Museo Bardo in Tunis.

In addition, the cruise liner company said that 8 guests, 7 Italians and 1 Russian, are injured and currently hospitalized.

With the twelve guests of MSC Cruises, confirmed dead following the terrorist attack during a shore excursion at the port of La Goulette, Tunisia, the death toll stands at 17 cruise guests that lost their lives in the tragic event.

Tunisian Minister of Tourism, Ms. Salma Elloumi Rekik said that a total of 20 people died in the attack.

Two gunmen have been killed by the security forces on the ground whereas three are believed to have fled the scene and still on the loose.

“ What happened yesterday (March 18th) in Tunis represent an attack to the values of friendship between cultures in which we have always believed. Our deepest sympathy and our condolences go to the victims and their families. We share their sorrow,” the cruise liner said.

Costa Fascinosa departed Tunis at 1:55 am on Thursday March 19th with 3,148 pax on board. A total of 3161 guests had been on board this cruise prior to the attack.

“All guests on board have been given the opportunity to disembark upon arrival to the next port of Palma de Mallorca on Friday March 20th, and for those choosing this option Costa will take care of their return to their home country,” the company said.

“In memory of all the victims of this terrible attack, a minute of silence has been observed today at Costa Crociere headquarter in Genoa, in all worldwide offices and onboard our ships. All the entertainment activities have been suspended on board our fleet,” the cruise liner added.

Costa Care Team members together with Costa Senior Vice President Beniamino Maltese are currently in Tunis taking care of the companions of the victims and of the 8 guests who are hospitalized.

After what happened in Tunis, Costa confirmed that all next calls in Tunisia for the upcoming cruises over 2015 for Costa Fortuna, Costa Favolosa and Costa neoRiviera have been suspended and replaced by alternative calls.