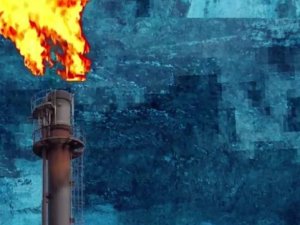 On average, oil production emitted of 10.3 grams of emissions for every megajoule of crude, but nations with the most carbon-intensive practices generated emissions at nearly twice that rate.

Oil and gas are generally produced together. If there are nearby gas pipelines, then power plants, factories, businesses and homes can consume the gas. However, if this is not economically feasible, the gas is flared.

“One of the challenges with flaring is that most countries don’t report it,” said Adam Brandt, assistant professor at Stanford and a senior researcher for the study. “In many countries, we ended up using country-level average satellite data collected by the National Oceanic and Atmospheric Administration. Scientists there have developed ways to estimate the amount of gas flared using the brightness of the flare as seen from space. It’s essentially an eye in the sky. For instance, Russia won’t say how much they are flaring, but we can see it from the satellite.”

Emissions related to a reservoir’s location and accessibility also play an important role. Venezuela and Canada rank among the most carbon-intensive oil producers because of the high energy needs and emissions associated with extracting heavy oil from unconventional reserves like tar sands. And so-called enhanced recovery techniques that use steam to loosen oil from aging wells add to the relatively high carbon intensity of oil production in places like Indonesia, Oman and California.

The study suggests that eliminating routine flaring and cutting methane leaks and venting to rates already achieved in Norway could cut as much as 700 megatons of emissions from the oil sector’s annual carbon footprint – a reduction of roughly 43 percent. And over the coming century, the world could avoid as much as 18 gigatons of emissions from the oil production expected to continue under even aggressive scenarios for shifting away from fossil fuels – mainly by halting extraction of the dirtiest resources and improving gas management.

The research, published in the journal Science, quantifies emissions from when companies first explore a site through transporting crude to refineries. Accounting for as much as 98 percent of global production, the study is the most comprehensive assessment to date, but lead author Mohammad Masnadi, a postdoctoral researcher at Stanford University, says total emissions from crude oil production may be higher than even these latest calculations suggest, because the current analysis does not fully capture emissions related to leakage and venting of methane, a powerful global warming gas.

The researchers developed models of the physical processes involved at each stage from initial exploration through transport to refineries. Data-intensive calculations for a single field could require measures for up to 50 parameters, including oil density, production rates and the amount of natural gas that the operator burned or captured in pipelines – as well as whether a producer injects water or steam to coax crude from wells, or uses some other method.

The work was funded by the Natural Sciences and Engineering Research Council of Canada, Aramco Services, Ford Motor, the Carnegie Endowment for International Peace, the Hewlett Foundation, the ClimateWorks Foundation and the Alfred P. Sloan Foundation.

This news is a total 628 time has been read
Tags: Flaring Key to Oilfield Emissions