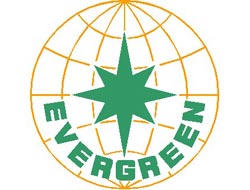 Evergreen Marine said that it plans to reduce the size of its global container fleet by a sixth over the next four years as it sees no clear signs of an economic recovery.

?There are 31 G- and GX-type container ships in the Evergreen Line fleet that will soon be withdrawn from service,? said Barbara Yeninas, a U.S.-based spokesperson for the world"s fourth-largest container line. "Those still owned by Evergreen Group companies will be scrapped, while the remainder will be redelivered back to their owners as the current charter periods end," she said.

The Taiwanese carrier, which recorded a loss in the first quarter as a result of the economic crisis, plans to take down 31 old cargo ships after they are retired and sell off the scrap metal, a company official told. Evergreen owns about 180 vessels.

"The shipping industry is facing severe challenges because of the global financial crisis," said the official, who declined to be identified because he was not authorized to speak to the media.

"Our chairman said this year would be the most difficult year for the industry because there is an oversupply of ships since the crisis struck. Basically, companies constructed too many ships in 2007 and 2008," he said.

Analysts and company officials said it was difficult to put a value figure on what Evergreen's old ships were worth, because of swings in scrap metal prices.

In April, Evergreen reported that it swung to a steep loss in the first quarter because of falling freight prices and lower volumes in the midst of the global trade downturn. Analysts expect the company to continue to operate in the red in the second quarter, after posting a loss of T$2.738 billion ($83 million) for the first three months of the year, as long-haul routes suffered a steep decline in demand.

This news is a total 2733 time has been read